In February 2012, BerryDunn was selected to facilitate the development of a university IT Master Plan. The goal of the engagement was to design a plan that:

The IT master planning process was completed in three phases:

UNLV’s approach entailed gaining an independent and objective perspective on the current capabilities, resources, needs, and issues surrounding IT at the University. The assessment provided a baseline the Core Team used to develop a plan that would meet the comprehensive needs of the institution.

Throughout the development of the Plan the University engaged more than 450 UNLV students, faculty and staff who contributed their perspectives on the University’s current and future technology needs. BerryDunn interviewed over 275 stakeholders, either in face-to-face meetings, via videoconferences, or by phone. An additional 131 responses were received from students, faculty and staff who responded to similar questions in an online survey.

In addition, throughout the planning process BerryDunn considered information and data from EDUCAUSE, the recognized thought leader for IT in higher education. The annual EDUCAUSE “Top Ten IT Issues” should be considered in reviewing, implementing, and sustaining the IT Master Plan at UNLV. 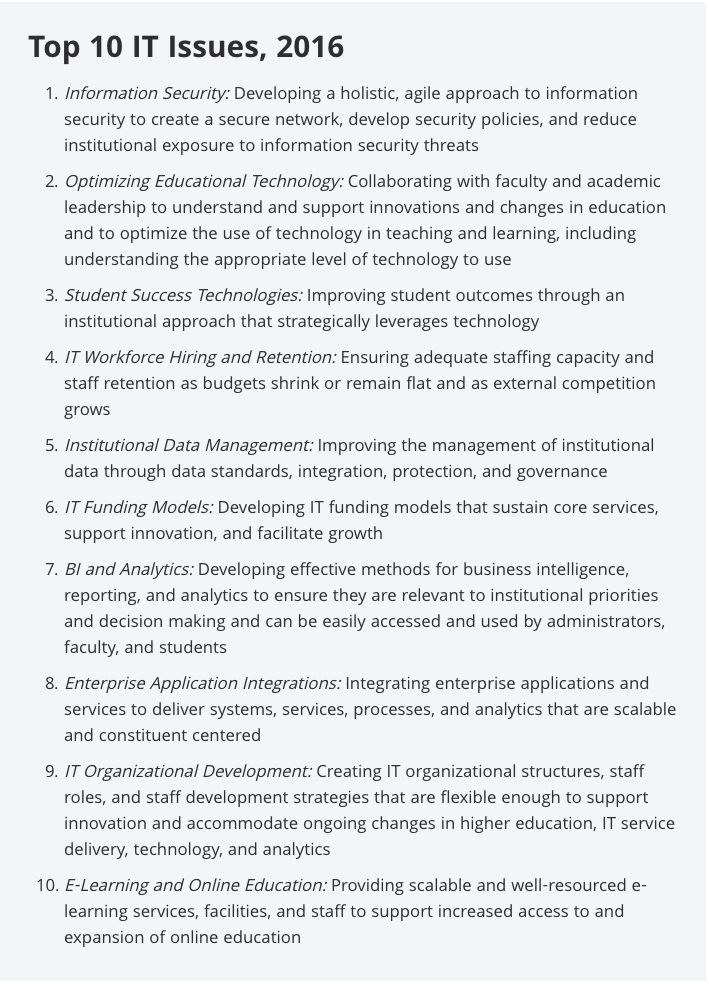 In October 2012, BerryDunn visited the UNLV campus, engaging a broad cross-section of stakeholders to understand their perspectives on the role of IT at the University. Responses from those 450 stakeholders, described above, were used to create the Current IT Environment Report and inform future planning. The Current IT Environment Report provides readers with an understanding of current services, resources and key challenges related to IT at UNLV. See Appendix B for a complete list of the identified strategic IT issues.

BerryDunn also conducted peer institution research with the University of Oregon, Arizona State University and George Mason University during Phase 1. Information collected from these institutions has been incorporated into the Plan where appropriate.

Upon completion of the Current IT Environment Report, BerryDunn met with over 100 faculty and staff in academic units to discuss the findings and refine the needs assessment. Building upon the analysis from the report and subsequent input from the academic units, the consultants worked with UNLV’s IT Master Plan Core Team to design and facilitate eight work sessions to gather campus-wide input on meeting the identified needs. Work sessions focused on the following topics:

The work sessions, attended by UNLV subject matter experts, generated ideas that built the foundation of the Plan. Refer to Appendix C for summaries of work session findings.

Although each work session included different constituents and emphasized different topics, redefining campus IT governance emerged as a focal point in all sessions. The work session recommendations have proven both visionary and resilient.

Since the 2013 work sessions concluded, the university has undergone four high-level leadership transitions and two strategic shifts. Nevertheless, although the magnitude of those campus changes delayed the Plan’s release, many of the major recommendations emanating from those sessions remain as important in 2016 as they were in 2013.

Phase 3: Revising the IT Master Plan to Maintain Alignment

As the first draft of the IT Master Plan was nearing completion, UNLV entered a unprecedented period of change in campus leadership that led to shifts in the university’s strategic direction.

In 2014, Acting President Don Snyder reviewed the IT Master Plan and assisted the team in strengthening the Plan’s emphasis on enhancing community partnership. Executive Vice President and Provost John Valery White and President Len Jessup reviewed the Plan in Spring 2015 and elected to delay approval and implementation, allowing time for the Plan to be further revised to support emerging Top Tier strategies. The final version of the Plan represents the best ideas generated over the course of the extended planning period and is fully aligned with UNLV’s Top Tier Plan.